From Creosote to Copper

Wood Preservation goes back in history almost as long as the history of using wood itself. There are references to wood preservation treatments way back to Greek and Roman times. Commercial pressure treatment began in the late part of the 19th century beginning with the protection of railroad cross ties using creosote. Wood preservation grew dramatically during the 1970’s when homeowners began to expand their living spaces with outdoor buildings and decks. Today treated lumber has become more innovative, and a great deal safer with the use of safer applications to preserve wood. 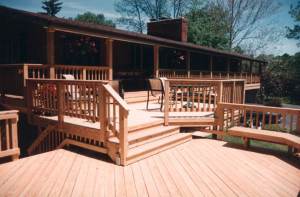 The benefits of using pressure-treated wood are that it becomes low maintenance and also the wood becomes impervious to rot or infestation from insects and fungi. There are woods that won’t decay and rot without having to treat them such a Redwood and Cedar, but there are less economical when using them in general construction. In the U.S. depending on your state and local ordinances any outdoor structure and structures built that touch masonry are required by some building codes to be constructed using either pressure treated, composites or non-decaying wood.

What is pressure treatment? 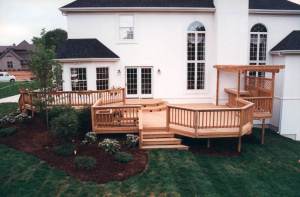 Pressure treatment is the process of applying a pressurized solution to the wood itself to make the wood more resistant to fungi, insects and decay. Up until 2003, the most common solution used to treat the wood was CCA (Chromated copper arsenate). CCA is a chemical wood preservative that contains chromium, copper and arsenic. CCA was used to pressure treat lumber beginning in the 1940’s. The majority of the wood used in outdoor residential construction since the 1970’s was treated with CCA. In 2003 the EPA (Environmental Protection Agency) put a transitional ban on the production of CCA for residential use. 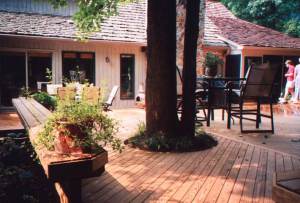 The new standard in pressure treated wood is ACQ (Alkaline copper quaternary). ACQ was developed to provide long-term protection from wood rot, decay and insect damage. ACQ contains no arsenic, chromium or other EPA listed hazardous chemicals. ACQ was also developed in response to a growing concern about the chemicals used in pressure treated wood and their impact on the environment. 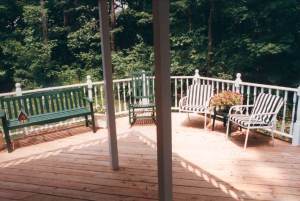 ACQ is a water based wood preservative which contains copper. Copper acts as a fungicide and insecticide. ACQ also contains a quaternary ammonium compound which provides additional fungus and insect resistance. Since ACQ does contain copper, the amount of copper used in treating the wood can vary and cause the wood to show slight color differences. After time ACQ treated wood without the application of paint or stains will weather to a gray patina.

It is hard to believe how far we have progressed in encompassing safety and sustainability when it comes to wood preservation. Not only have we made it environmentally sound, the choices we have are endless, from treated plywood to tongue and groove treated boards. Alexander the great was said to have soaked the boards to build his bridge in olive oil for wood preservation. We have certainly come a long way to get to the industry standards we have now.

If you are considering your next outdoor project, find an Archadeck location near you and consult with them about the best materials for your next project. Your local Archadeck office will educate you more about the benefits of using pressure-treated wood vs. using alternatives such as composite or a hardwood such as IPE or tigerwood. They will also give you ideas about your next project and work with you to identify the structure(s) that meet your needs.