When Maurice Meagher of Archadeck of Nova Scotia starts a new deck design job, the part he looks forward to most is designing the structure to fit the way the homeowners want to live. It’s not about building the biggest deck or using the hottest new materials. 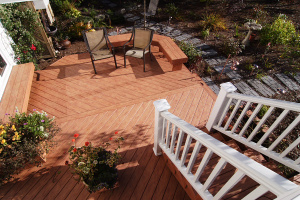 Standing atop the second deck level, gazing at the lower deck
It’s about designing the right structure with the best materials for the family. After all, this is a new part of their house. It is an extension of where they live and should reflect how they live and how they want to live.

This family in St. Margaret’s Bay in Nova Scotia had a couple requirements. They wanted a 2nd story living space so they could enjoy the ocean view behind their lovely home. They also wanted a deck on the first story to tie into the garden and backyard. They wanted no barrier or rail on the lower level deck so traffic could flow from the deck into the yard and to the beach area. 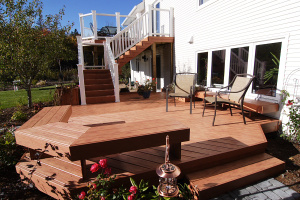 On the top level, they wanted to dine, entertain and grill. Grilling on this ocean view property could be affected by the breeze coming off the ocean. The family wanted to be able to enjoy the ocean view but still have some protection from the wind. So, Maurice built a glass railing so as not to obscure any of the beautiful view. 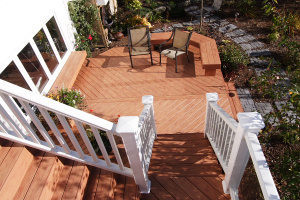 The stairs were designed to be equally beautiful and functional. With the ocean view and the beauty of the deck down below, the scene from the staircase was exceptional. The white rail post used from the second level extends down the stairs and a decorative white picket was used on the deck stairs.

The deck itself was made of" TimberTech Earthwood Teak":http://timbertech.com/products/ with TimberTech Radiance railing. 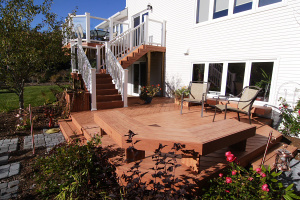 The deck’s lower level included a corner bench and another bench as well as steps on both sides going out to the garden.

It was awarded “Most Outstanding Exterior Renovation” by the Nova Scotia Home builder’s Association.

Here is the “before picture”. Wow! 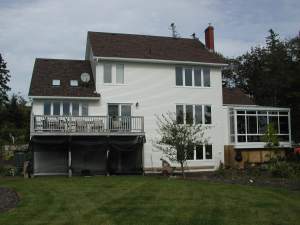 For more information or to schedule a free consultation, contact Maurice Meagher of Archadeck of Nova Scotia