Catch both Don Engebretson and Baron Biedenweg of Archadeck of of Northeastern Indiana at the upcoming Fort Wayne Home and Garden show. 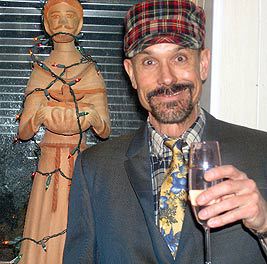 I had the great fortune of seeing Don Engebretson, the renegade gardener, speak at a company annual meeting last year. He was one of the most dynamic, engaging, and educational speakers I’ve seen. We’ve all seen many a guest speaker at corporate meetings and most are not that memorable after the meeting. I can even remember a couple for trying hard to use a group demonstration that failed miserably. But, two that I’ve seen of late that are tremendously memorable are Don Engebretson and John Jantsch of Duct Tape Marketing. If you’re not currently following John Jantsch on Twitter, you should. More on John in a future post.

Don Engebretson is speaking at the upcoming Fort Wayne H&G show and he is certainly a must see. I was actually involved in helping to market the speaking engagement Don had at the company meeting last year. Don was speaking at the Archadeck Deck and Porch Builders annual meeting. So, in looking into marketing his presentation, I took a look at his web site looking for a professional headshot. I found the headshot but professional was not the word I would use to describe it. It was downright kooky. I hope he doesn’t mind me using it here since I’m saying such good things about him. His offbeat and “interesting” headshot are true to his personality.

Don’s speaking topic was about designing a great trade show booth. In addition to renegade gardening, he also has significant experience in trade show and booth design. None of my business pursuits have landed me at a trade show any time recently but the principles that Don presented stay with me and I still think about them as they can easily translate to great tips for other business meetings. Here are a couple principles he talked about.

1) Don’t stand in front of your booth

We all know how difficult it is to figure out where to stand in your booth. If you stand inside your booth, you might not be able to make eye contact with the people walking by. Even though standing out front and “soliciting people” feels like the right thing to do, people generally avoid that booth like they unfortunately avoid the door at the grocery story with the charity collectors. You also act as a physical barrier to entry if you stand out front.

Don says nothing takes away from your effectiveness more than a plain sterile backdrop. He encourages you to use color pictures, charts, even old pictures but don’t use the standard drape.

3) Put greenery in your booth

As the Renegade Gardener, it makes sense that he would recommend greenery but it goes without saying that it makes the booth come alive, makes it more noticeable, and makes it more inviting.

I can’t remember the line he used but most of us can’t stand when someone immediately asks “how can I help you”. When people are at a show, they may be getting ideas, they may not even know what you do, but the probably want to take a gander first and then talk.

Our Archadeck owner in Northeast Indiana, Baron Biedenweg, was fortunate enough to be one of the Archadeck owners at that meeting. Likely Don’s presentation provided great insight as Baron designed his brand new 200 square foot display which will feature composite decking, a pergola and several types of railing. Additionally, there will be other product samples. You will be able to find Baron at booths 127/129. The show is February 25-28, 2010 and is located at the Allen County Memorial Coliseum in Fort Wayne Indiana.

Stop by and meet Baron at the show. Baron is your local Archadeck builder. Archadeck is a more than 20 year old company and is the premier builder of outdoor structures including decks, patios, screened porches, sunrooms, pergolas, gazebos, 3-season rooms, outdoor kitchens, outdoor rooms – the list goes on and on.

Baron was a born builder. Previous to owning his Archadeck franchise, Baron was a master boat builder, even holding 7 patents related to boat building. In addition to being great to work with, Baron’s teams handiwork is detail oriented, precise, exacting and of the highest quality. After you meet him, feel free to ask him about his free deck safety inspection for existing decks. Or, ask him for a free consultation for your upcoming project.