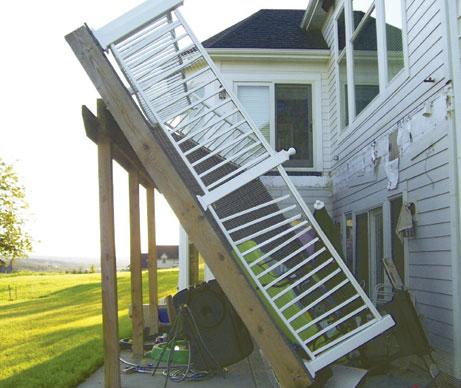 Each year the North American Deck and Railing Association sponsors a “deck safety month”. The goal is to make people aware of the dangers of not maintaining their current deck, or replacing an older one. Here are some scary facts and figures that I found:

“According to the National Deck and Railing Association, between 2000 and 2006, there have been:

At least 30 deck collapse-related deaths reported.
More than 75 percent of people on a deck are injured or killed when it collapses.
There are 40 million decks in the U.S. that are over 20 years old. At a conservative 1 percent, that means 40,000 decks are currently in need of repair or replacement. Taking that estimate to 10 percent brings the total number of unsafe decks to 4 million.”
Decks and patios are a natural spot were many people congregate to either share a meal, enjoy a party, or countless other reasons. A deck collapsing in the middle of a dinner party would be quite a mood killer! So if your deck is in need of a repair or maybe you are looking into purchasing a new one, check out Archadeck.